Dolphins are the number three top tourist attraction in Jamaica. Swimming with dolphins is a bucket list item for many and these adorable smiling ads make it easy to see why. Regarded as some of Earth’s most intelligent animals, dolphins are as smart as apes with brains surprisingly similar to that of humans. They are very social mammals living in matrilineal groups that hunt and play together with as many as 1,000 members. Each pod has its own language, every individual has a name and survival and nurturing skills are taught. Their language is highly complex and to date has scarcely been deciphered by humans. They can swim 100 miles in a day and have been recorded to dive to 1,000 feet. Their hearing is better than adult humans and their sense of touch and sight is well-developed. Their biggest threat though? Man. 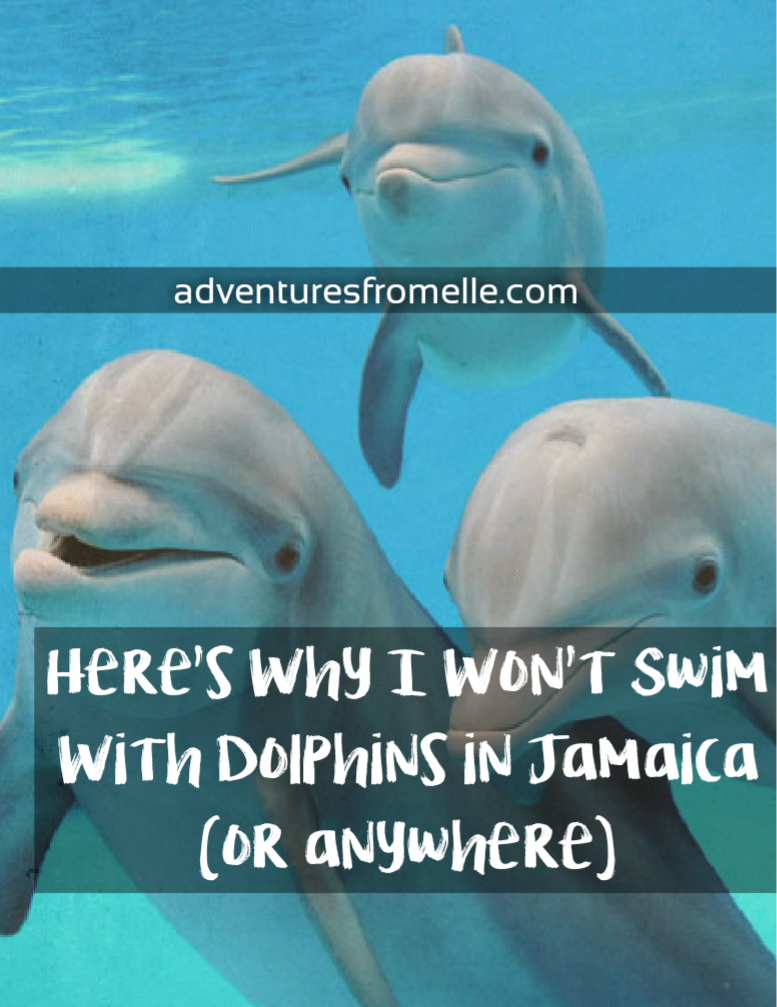 Pollution, fishing and hunting have given dolphins an uncertain future and in 2006, the Yangtze river dolphin was rendered functionally extinct. Dolphin parks show us the image of a playful gentle grinning giant, but behind this façade lies a sad reality. If you really love dolphins, here’s why you shouldn’t swim and play with them at all… at least, not in a dolphinarium.

1. Captive dolphins are controlled by their food.

Captive dolphins are fed far less than they take in the wild. Food is withheld during training as the only way to train a dolphin is by food rewards. For the “reward” to be “rewarding” the animal has to be hungry which means that captive dolphins are intentionally deprived to make training possible for those cute tricks we enjoy watching them do.

2. The lifespan of a captive dolphin is half that of a wild dolphin.

One would imagine that dolphins in captivity protected from predators, from injury by ships, fed regularly and with oversight by a veterinarian would live longer than those in the wild. Not so. They live just about half as long, 20-25 years against the usual 40-50 year lifespan for wild ones. For those dolphins that survive the initial trauma of capture (being caught in a net underwater and unable to breathe etc.), 53% die in the first three months of captivity. The most common causes of captive dolphin death are pneumonia, liver problems, self-harm/suicide, stress ulcers, infections, foreign body ingestion and even from medical care or anesthesia. (Additional sources: 1 2)

3. The demand for dolphins in marine entertainment parks threatens their populations.

In dolphinariums, reproduction is difficult. Females are often bred from a convenient male such as their father. For the most part, marine parks must replenish their supply of dolphins by taking them from the wild. In addition to hurting or killing the dolphins during capture, these kidnappings have terrible effects on the pods of wild dolphins. Dolphins are highly social mammals and their entire lives can be spent mourning the loss of a single member. As mentioned earlier, each pod of dolphins is unique with different languages and culture. The new group in a marine entertainment park is foreign to a wild-caught dolphin, leaving them stressed, lonely, and confused. 52.26% of bottlenose dolphins born in captivity do not survive past one year. Mothers who have been deprived the opportunity of learning nurturing skills within the pod don’t know how to parent so sometimes they inadvertently drown their calves. In the wild, babies nurse for two to four years but in captivity are removed much earlier, reducing their potential for survival. As such, some dolphin species are now endangered while others approach endangered levels. (See Marine Fisheries Act here to understand the loopholes why dolphins are still being caught, also see source)

4. Quality of life for captive dolphins is lower.

Captivity is incompatible with the innate needs of a dolphin. In the ocean, they chase their prey for hundreds of kilometers a day. In dolphinariums, they have no choice but to eat dead fish and swim in endless circles around their tank. They become stressed, psychotic, immunocompromised and undergo physiological changes from the extremely small pens and shallow water they are kept in. In tanks, the chlorine used to keep the water clear enough for visitors to look at them blinds them and sloughs off their skin. In sea pens they cannot avoid the sun, their skin darkens from sunburn and sometimes peels. They commonly die from pathogens already existing in the facility to which they are introduced or caught from the humans with which they interact. The stress of their confinement often causes these marine mammals to aggress their own young, other dolphins, their trainers and visitors participating in interactive programmes. Injuries to guests globally are notoriously underreported and claims are often settled out of court. Several trainers have been killed and a number of trainers including Ric O’Barry (the trainer of Flipper in the movie) have wound up becoming advocates for release because of what they observed.

Dolphins excrete about 10lbs of waste each day. This nutrient-rich excrement encourages the growth of harmful algae blooms (eutrophication) which depletes the dissolved oxygen in seawater for fish to breathe, and so they are killed. Coral also gets killed when algae grows on their bodies, preventing them from feeding. Thus, in every single location of every single dolphin pen in the world there has been destruction of the surrounding ecology, particularly down current, for several kilometers.

We have put them in captivity but we can get them out.

Animal domestication has been practiced for centuries. Horses have been domesticated for thousands of years for the purposes of transportation, work, entertainment and companionship. The same can be said about dogs and cats. Is that unethical? Only a tiny minority would answer yes. Thus, the key for dolphins is finding a balance. You can still see dolphins while respecting them. Wild dolphins have shown us their friendship and camaraderie for years—they approach our boats, surfboards, and docks and have been known to save countless human lives.

“To become masters and possessors of nature” – Rene Descartes

To become masters and possessors of nature is innate human desire but with this power comes a great responsibility–respecting dolphins as intelligent, sensible, social, and complex is the only ethical choice. The easiest way to help is by resisting the temptation to buy a ticket to swim with dolphins and telling your friends and family why they shouldn’t, either.

If you must see a dolphin, here’s a greener and more ethical way to enjoy them (not all apply in Jamaica, sorry).

Photo by Guillaume Meurice on Pexels.com

Photo by Tom Swinnen on Pexels.com

The best part is that when you choose to see dolphins in the wild, you’re seeing healthy, happy animals living together with their families exactly as nature intended.

What can be done for captive dolphins?

It takes a lot of work to rehabilitate captive dolphins but it can be done. They have to be taught to take live food underwater at odd hours, in different places and the rehabilitator has to avoid eye contact and disassociate from the dolphins. It’s easier when the dolphin was taken from his family after learning survival skills and often helps if they are released into their home waters, but they also have to be mentally intact after years of stress. Even captive born dolphins have been rehabilitated and released, and thrive. There are always a few who cannot, that are too old, injured or just too dependent and for them, true sanctuaries exist in very large sea pens that give them a semblance of normality for their remaining days. We are also able to completely study these intelligent creatures in the wild so captivity serves no benefit–save for enormous financial profit.

The Situation With Dolphins in Jamaica

Currently there are four dolphinariums in Jamaica: two in Ocho Rios, one in Montego Bay and the other was recently opened at the Puerto Seco Beach in Discovery Bay since 2019. The US standard for dolphins is a pen or tank 24 x 24 square feet and six feet deep. Jamaica usually follows these guidelines, but it is reported that the pen in Discovery Bay is only 4 feet deep on the shallow end.

Currently, there’s an effort to have the Puerto Seco beach’s dolphin licence revoked and the reasons behind the effort are strong. Despite objections to its construction raised by marine scientists of The University of The West Indies (UWI) Marine Lab, Jamaica Environment Trust (JET), The Discovery Bay Community Development Committee and The Fishermen’s Coop of Discovery Bay, the Government granted a permit for the attraction in October 2018. However, there was no town hall meeting with the people of Discovery Bay. The Bay was declared a fish sanctuary in 2009 and the ensuing decade has seen a steady increase and return in its fish population. The Bay is unique in that it’s nearly a mile across, calm and sheltered from the open sea and home to a wide variety of sea life. Discovery Bay has had a marine lab for 65 years, and it is the most studied bay in the world. There are more papers written on Discovery Bay and monitoring of the reef than pretty much anywhere else because it’s a very valuable and ecologically significant entity. Not only is it ironic that a fish sanctuary is home to four captive aquatic mammals in a tiny shallow pen, but it’s counter-productive to maintaining the health of the still recovering fish population. Forty pounds of dolphin excrement leaching into the sanctuary per day will eventually increae the algal bloom, deplete the oxygen content of the water and can quite literally kill the Bay.

I hope this post was an eye-opener. I’ve always felt uneasy about visiting a dolphin atttaction despite how appealing it sounds to see these big beautiful creatures up close. Glimpsing the tiny enclosures on a recent trip to Puerto Seco Beach tugged on my heartstrings and led me to research the industry, aiming to find truth and not opinionated pieces but the evidence is undeniable. The industry causes much more harm than good. After reading this blog post on why we shouldn’t hold sloths in Costa Rica, I thought it would be great idea to educate my own readership on the reasons why we shouldn’t support the lucrative business of animal tourism in Jamaica either. It may seem trivial in comparison to our country’s many critical issues, but this issue is one of conservation and raising awareness of the activities which threaten our planet.

Many thanks to Erica Hamilton for providing some local facts. If you’re interested in learning more about the argument against the dolphin attraction at Discovery Bay, check out the Save Discovery Bay group on Facebook and do sign this petition to have their licence revoked. Puerto Seco is a very lovely beach– it can do without captive dolphins.

Update (August 11, 2019): I added a few sources throughout the blog post to provide additional reading material and a lot more hyperlinks are posted in the comments section too. Read at your own leisure.

66 thoughts on “Why I Won’t Swim With Dolphins in Jamaica.. Or Anywhere”