The Joy Spence Appleton Rum Estate Experience is an elegant Jamaican cane-to-cup tour showcasing what it takes to make one of the world’s finest rums. Set in the delightful Nassau Valley in the parish of Saint Elizabeth, the Appleton Estate was established in 1749, however, it is believed that origins of the Estate date back to 1655. This rum is one of the few in the world to claim a terroir, that is, a rum 100% produced in the perfect trio of unique weather, soil and topography of the Cockpit Country which imparts a unique quality. And why is this tour named for Joy Spence might you ask? Well, she’s been with Appleton for over 30 years and is the world’s first female to be appointed Master Blender. That’s definitely a big deal.

Pssst! Sign up to get new posts delivered to you inbox.

Directions To The Appleton Estate

As is customary, I’ll describe this tour from Kingston although my drive was thankfully shorter since I was staying in Mandeville for a bit. The drive from Kingston is roughly 2 1/2 hours and takes you along the Mandela Highway, Highway 2000, then through Manchester and into St. Elizabeth along Spur Tree Road. After passing through the community of Goshen, look out for the right turn by Season 2 D Bonez Restaurant, but don’t worry– there’s a big Appleton Experience sign here as well to help. From there, follow the road until it forks in two, where you’re going left. From here, you can’t get lost really. It’s one straight albeit lonely road which is well-signed to reassure you that you’re on the right track. The views on the way up are a treat, and the road wasn’t actually too bad– just a few potholes here and there and a lot of cane trash along the way as if to mark the path.

Park and walk up to the entrance where you’ll be met by an usher and shown where to purchase tickets. Tickets cost US$30, which, although it may sound a bit pricey, I’ll show you shortly why it’s worth it. The local rate equivalent is JA$2,500 but for the months of July & August, there’s a discounted local rate of JA$2,000.

Tours are Mondays to Saturdays, 9 am until 4pm with each tour lasting roughly 2 hours. A new tour starts every half hour and walk-ins are welcome! Each tour comes with a complimentary rum cocktail, Stormy Valley, made from Appleton’s Signature Blend Rum, ginger beer and bitters served on the rocks.

Start of the Appleton Rum Tour

Arriving smack on the dot of 12:30pm made my quartet too late to join the tour that was just starting so we opted to take the 1pm tour. Thus, we started our Appleton Experience with the complimentary cocktails, a refreshing reward after a long hot drive. Promptly at 1pm our guide rounded up her team and started the tour by a wall which pays tribute to none other than the tour’s namesake. Joy joined Appleton Estate in 1981 as a chemist then was awarded the prestigious role of Master Blender in 1997, the first female to officially hold this role in the spirits industry.

Next, we were ushered to the theatre for a 7-minute delightful documentary on the history of Appleton Estate and how their rum has earned its place in the pulsating spirit and culture of the Jamaican people. They conveniently left out the detail of slave labour which I’m sure must have been used given the time period (British West Indian slavery ended in 1838) and painted the estate’s past a little too glamorous for my tastes, but my feelings weren’t too bruised.

Afterwards, we were escorted to this cabin to get inebriated before the cane-to-cup experience. I’m half-joking but the rum punch was ALL-YOU-CAN-DRINK and music to the ears of an islander. We weren’t shy, especially given the heat of the Jamaican summer sun and how cold and delicious the blend was.

The Cane to Cup Experience

Step One: Sweet sweet sugarcane planted in thousands of acres upon acres in the Nassau Valley. The juice was once harvested manually by slave labour or by harnessed beast of burden as Paz the donkey and a few volunteers demonstrated. This method extracted 65-70% of the cane juice, the residue of which, bagasse, was used as fodder or fuel for the boilers. Nowadays, the juice is extracted mechanically which harvests over 95% of the juice. We were given sugarcane to chew as well as chilled delicious cane juice at this step.

Step Two: Boiling the sugarcane juice to get molasses, a by-product of sugar manufacture. In the words of our guide, molasses is “good for women and even better for men.” 😉 Molasses is very rich in essential vitamins and  minerals such as iron, calcium and magnesium, but that didn’t stop most of the tourists (me included) from grimacing.

Step Three: Fermentation to produce a beverage with 8% alcohol content by volume (ABV), but of course, that wouldn’t be rum. Thus, that brings us to:

Step Four: Distillation, the step we weren’t allowed to photograph or record. That wouldn’t do well for business, but all in all, it was an interesting process which is responsible for the rum’s alcoholic content of 40%.

Step Five: Ageing and Blending. This is where Joy Spence and the sophistication which elevates rum to the same standard as the world’s premier spirits come in.

Rum at the Appleton Estate is aged for four, six and twelve years in 40-gallon American oak barrels to create the Signature, Reserve and Rare blends respectively. During this time, the flavours mature to take on hints of various spices and the colour darkens to that characteristic of Jamaican rum. Other ages of rum are available but as you can imagine, the older the rum, the rarer and of course, pricier.

Step Six: Enjoying! I didn’t think rum belonged to the same ranks as fine wines but boy, was I wrong! Swirling and inhaling before each sip made my palate appreciate rum in ways it never has before. Drinking the three rums neat in order of ascending age was also a pleasant experience– each grade had a progressively increasing complexity of flavour.

Here are the subtle flavours imparted from each age. Citrus is a common theme. 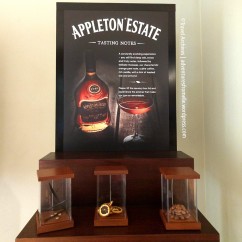 From this vantage point, we were able to look out and admire the upturned egg carton topography of the Cockpit Country which makes Appleton rum the quality it is.

We ended the tour with a brief stroll through the souvenir store then had an uneventful trip back to Mandeville.

The Appleton Experience is one to remember– thorough, sophisticated and playful all at the same time. It’s no surprise then that I rate this experience full stars, ☆☆☆☆☆, and my appreciation of rum will never be the same again. I learnt a lot without feeling overwhelmed and it was amazing to see how much goes into the making of a single cup, much as how a lot goes into the making of a single cup of Blue Mountain coffee! It’s mindblowing that humans came up with these beverage ideas and spent centuries perfecting the craft.

Check out fellow local blogs SimplyLocal.life and downdiroad.com for other perspectives on this unique tour. Also, if you’re local & want to take this tour, now is the time! Get the discounted rate of 2000JMD per person for the summer months of July & August 2018.

Must be 18 years or older to drink in Jamaica. 👀 Drink responsibly.

Check out my extended photo gallery on Facebook, and while you’re there, give the page a thumbs up too! 🥂

Check out another rum tour: