Jamaica’s Tourism Linkages Network through the Ministry of Tourism is on to something big with this one. The inaugural Jamaica Blue Mountain Coffee Festival is a three-day weekend affair with the main event taking place on Saturday March 24 at the cool historic military training centre of Newcastle in the Blue & John Crow Mountains National Park (BJCMNP).

At over 3,000 feet (900m) above sea level, the festival couldn’t have had a more appropriate venue since authentic Jamaican Blue Mountain coffee berries are sown, reaped and roasted along these slopes at similar altitudes. I decided to feature the festival on Adventures from Elle since I’m sure it will become an annual event. The festival is part of initiatives to foster the growth of culinary tourism in Jamaica, steering away from the island’s overplayed ‘sun, sand and sea’ slogan. The first ever Coffee Festival served up Jamaican food and coffee along the Blue Mountain Culinary Trail with indigenous arts and crafts showcases, live reggae music and misty rugged mountains as an idyllic backdrop. 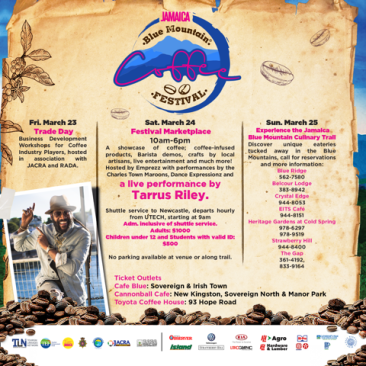 For the Saturday March 24 festivities, pre-sold tickets costed JM$1,000 for adults and $500 for children under 12 and students with valid ID. Hourly shuttles operated from the University of Technology (UTech) in Papine, starting at 9am. Parking was provided at UTech with none available at Newcastle, a clever way to prevent traffic and congestion on those narrow winding mountain roads. The festival lasted 8 hours from 10am until 6pm. Before boarding the shuttle, patrons were treated with a complimentary bottle of Catherine’s Peak water and a newspaper commemorating the festival’s inaugural year.

I arrived at 1pm when the festival was already in full swing. Trendy reggae tunes and the aroma of sizzling jerked meats wafted along the breeze. The tents were sensibly arranged into three rows creating two paths for foot-traffic and facilitating ease of movement. The exhibitors were arranged by themes into arts and crafts, skin care, food, coffee and a fifth miscellaneous group featuring government agencies such as the Rural Agricultural Development Authority (RADA) and a few other private stakeholders and sponsors.

For us caffeine junkies, the coffee was plentiful! The coffee shops included in the festival were Cannonball Café, Starbucks, Café Blue, Deaf Can Coffee, Stoneleigh Coffee Roasters Ltd. and Toyota Coffee House among others. Hot, cold, black, with sugar, au lait, blended with rum or spices, you name it, it was available. The booths which gave out samples never ran empty of patrons with good reason, especially when those cups were filled enough to make you feel you paid for it.

What’s good to drink is also good to eat so lots of coffee desserts were there as well. Coffee sponge cake, coffee bread pudding, coffee cookies and coffee ice-cream made in front of you. It didn’t stop at sweet: a booth in the food section boasted that their rice & peas and other savoury dishes even included you-guessed-it: coffee. 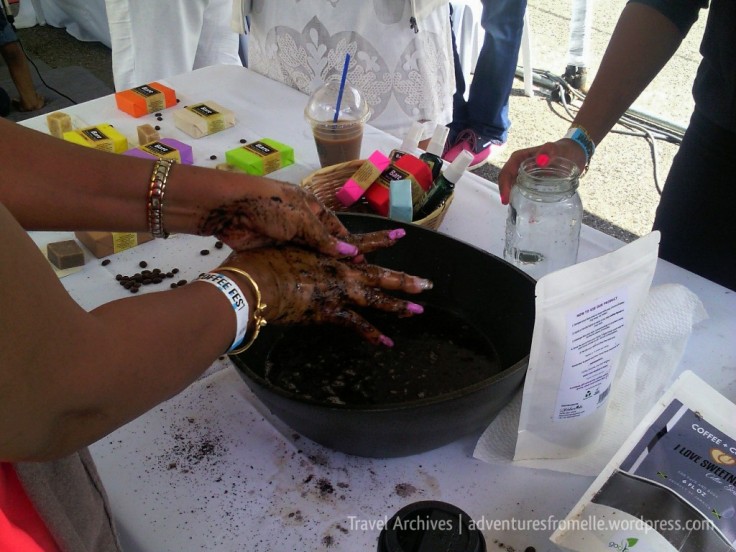 I LOVE SWEETNESS Coffee Scrub Demonstration. Couldn’t photograph my own hands so I borrowed this lady’s pair (with her permission of course 😅)

Handmade jewelry by Chrissy’s Coils and Purple Jade, footwear by Lynmoores Crochet Sandals & More, creative pieces by TC Tender Touch Fine Art, personalized gift items by Skylark Designs and skin care by Pretty So’ Botanicals and I LOVE SWEETNESS Coffee Scrubs all had interesting things to offer. What stood out for me was my free coffee scrub demo by I LOVE SWEETNESS. Their Bare Citrus Blast soap sample followed by the coffee scrub left my hands smelling great and feeling luxuriously soft. When I run out of my usual exfoliator, I’ll certainly give one a try. Their scrubs are located in pharmacies throughout Kingston, Portmore, Mandeville, Brown’s Town, Ocho Rios and Montego Bay in case you want one too! A fellow local blogger had given them a review last year which I eventually lost on my mental list of things to try but here they are again front and centre of my mind, having made an impact on me at this festival. 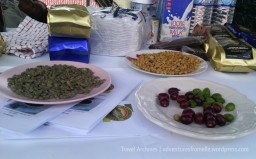 Lots of affordable lunch options were available for vegetarians and meatlovers alike, including ital stews, CB pan chicken with National hardo bread, Reggae Jammin hotdogs and soups. I kept it simple with a panini and fries. In addition to street food, One One Cacao offered local artisan chocolate alongside the Jamaica Peanut Butter Factory serving peanut butter made from local peanuts and sweetened with local brown sugar, no preservatives added. They have 2 types, regular and chunky. Staying true to their minimally processed word, the red peanut seed coatings  are ground up with the kernels to create a chunkier butter. Thus, if creamy butter is your thing, their brand may not suit you but if you don’t mind the chunks or are seeking a local healthier alternative, look out for this brand at the supermarket. I was very pleased with my local Mount Pleasant Chocolatiers artisan 70% dark chocolate bar purchase too! The name is a mouthful, yes, but a very delicious one. I chose one with sea salt but they also have plain and chili flavours. Also, the bars are 100% organic with only 7 ingredients. I challenge you to find a chocolate bar with fewer ingredients. 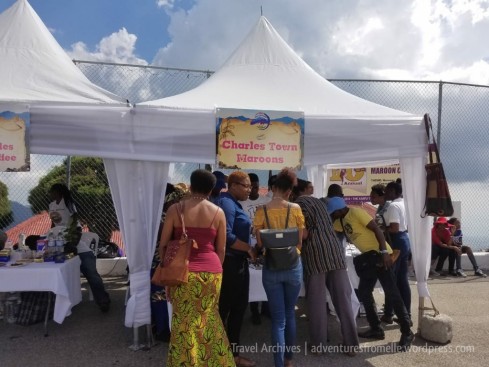 Handcraft from the Charles Town Maroons

Maroon representatives from Charles Town, a small village near Buff Bay, Portland, occupied a large booth near the stage. They had beaded jewelry and small handcraft on sale along with brochures and posters outlining their history and contribution to Jamaican culture. My friend and I had a talk with one for a bit where we learnt of the annual Charles Town Maroon Conference, a 4-day event in June which brings together indigenous peoples and academics. This year’s staging will be its 10th year running and it’s held in their village square Asafu Yard. Charles Town isn’t located deep inland like other Maroon towns so the roads are very decent I was assured. Intellectual discourse alongside preservation of Jamaican culture in a beautiful rural setting sounds like an event worth marking on the calendar.

Tarrus Riley’s performance from above

What’s a festival without music? While the deejay kept us happy with reggae and soca throughout the day, Tarrus ‘Singy Singy’ Riley delivered an excellent performance around 3pm, crooning his hits and other popular reggae favourites for about half an hour. And of course, if music is playing, dancing will follow. A pop-up dance off in a ring happened at some point throughout the day, creating much excitement and building camaraderie among the staff from which some of the dance teams emerged.

The Story Behind Newcastle

If you’re a regular Adventures from Elle reader, you should know the history & beauty of the venue wouldn’t be lost on me. Newcastle was founded in 1841 by British Major General Sir William Maynard Gomm when he observed that deaths from yellow fever were much fewer in the mountains than at Up Park Camp, an army barracks on the Liguanea plains. Yellow fever mortality rates were so high that being stationed in the Caribbean was seen as a death sentence. Gomm sent letter after letter to the British government seeking permission and finances to start construction of a mountain barracks but was repeatedly ignored due to the expense of this venture. Eventually, Gomm had to act on his own, selecting and purchasing a coffee plantation for Newcastle’s construction at £4,230 then later receiving Crown permission. By 1845, Newcastle was fully operational. It has braved 2 natural disasters, first a hurricane in August 1880 then Kingston’s earthquake of 1907. Several buildings were destroyed by both and have subsequently been restored. Since independence in 1962, the Jamaica Defence Force (JDF) has operated Newcastle and it is currently used as a military training ground.

What a stunning site to train! Newcastle gives a breathtaking view of the rugged Jamaican topography all the way out to the Kingston harbour. The mists of tropical cloud forest make our mountains appear blue and the red-roofed barracks against this contrast make for a delightful picture.

Newcastle is a national heritage site with some 12,000 civilians traversing it each year en route to higher stops such as Holywell or over the mountain range into Portland. Plans are currently underway to create a military museum and café for visitors to linger a bit longer as well as to improve the parade ground and restore the regimental badges on its walls dating from the 1800s till present.

The Blue Mountain Coffee Festival aimed to display the high quality and uniqueness of Blue Mountain coffee, promote the Blue Mountain experience and stimulate the export of Jamaican coffee and coffee-related products. With that, I’d say the festival has been a success! I already missed a BJCMNP event success this year with ‘Symphony in the Mountains’ on February 25 celebrating the park’s 25th anniversary, so it’s good to know I didn’t miss another. My only criticism of the festival was the departure. I joined a very long queue at 5:15pm which kept growing longer at the front, and I didn’t get onto a shuttle heading back to UTech until 6:30pm. By sunset, the temperature dipped really quickly to the point where I couldn’t feel my nose nor fingers. That made the wait even more unbearable but I guess that’s one of those first year kinks. They had volunteers taking feedback from patrons and this issue was repeatedly voiced so I’m hopeful they’ll iron it out. Despite that glitch, I rate the festival full stars, ☆☆☆☆☆ and I’m already looking forward to next year.