I feel lucky to come from and live on this tiny rock in the Caribbean Sea: Jamrock, Jamdung, yaad, Jamaica. According to Bob Marley, Jamaica is a paradise but Jamaicans are the only ones who don’t know it, a rather unfortunate but true statement since poll after poll shows that many of our nation’s youth have their eyes set on living elsewhere and are disillusioned with the nation’s direction. Jamaica has many issues but one thing we aren’t short of is beauty. The island is so so beautiful from its verdant rugged mountains, its clear blue rivers, majestic waterfalls, stunning rainforests, idyllic beaches and sunsets so of course, we explore and take pictures of the country’s scenic spots in our spare time. So many other lovely spots could have made this list but after much deliberation and in no particular order, I’ve decided that these places deserve a space on Jamaica’s top 10 most Instagrammable spots.

1. Rick’s Cafe on the cliffs of West End, Negril is one of the best vantage points to admire a Jamaican sunset. It was opened in 1974 at a time when Negril was a sleepy seafaring village but now it’s a popular resort town traversed by thousands of tourists each day. Rick’s has grown with the times, rebuilding and renovating especially after damage it sustained from two of Jamaica’s most infamous hurricanes. Cliff-jumping for the brave or watching other people cliff-jump (for the sane) is the main attraction they offer in addition to watching an uninterrupted technicolor sunset. People line up by the dozens to jump at their own risk and a few locals will put on a hair-raising dive for tips, all worthy of the ‘Gram.

2. Konoko Falls is a tourist attraction nestled in the hilly outskirts of popular resort town Ocho Rios. The Arawakan word for rainforest, konoko, lends its name to this garden and 600-feet cascading waterfall hewn from limestone rock, the power of the river carving out a picturesque path after several centuries. Konoko Falls is so Instagrammable, from the waterfall, its mineral pools, the rich untouched jungle-like foliage, the bursts of colour in between from the numerous tropical flowers and the Ysassis lookout point with the iconic ‘Konoko Falls & Park’ sign as backdrop.

3. Just up the road from Konoko Falls is an even more beautiful gem: the Dunn’s River Falls. Dunn’s River Falls is Jamaica’s most popular tourist attraction and it recently won the ‘Caribbean’s Leading Adventure Tourist Attraction’ award at the World Travel Awards in Nassau, Bahamas. It’s not hard to see why Dunn’s made the list as the picture-perfect waterfalls are terraced like giant natural stairs, with several small lagoons interspersed among the vertical sections of the falls. The falls empty into the Caribbean Sea at the western end of a white-sand beach. 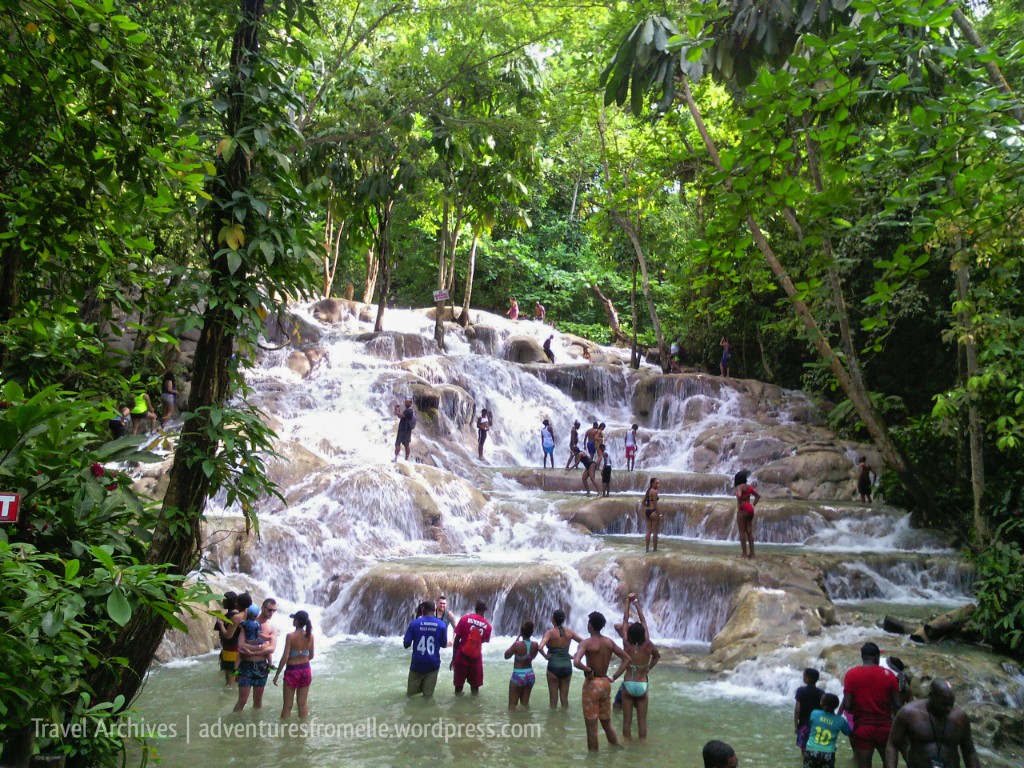 4. Holywell is located in the tropical mist forests of the Blue and John Crow Mountains National Park and is a cool escape from Kingston’s heat. This 330-acres “park within a park” is blessed by the fragrance of fresh mountain air and pine trees, and at 900m (3,000 ft.) above sea level, the cool temperature allows Holywell’s ecosystem to support a wide variety of ferns, flowers, and trees which are rarely seen in other parts of Jamaica. The views extend all the way out to the Kingston Harbour, and the cabins themselves are IG-worthy too.

5. YS Falls is Jamaica’s second most popular waterfall after Dunn’s River Falls, of course, and it’s easy to see why. Jamaica’s abundance of limestone rock makes it possible for so many delightful perfectly-tiered cascades to exist throughout the island, and YS Falls is no different. I’ve been twice, ziplined above the waterfalls once and it’s as thrilling an adventure as it sounds. I love the wide open savannah they shuttle you across from the car park to get to the falls and even the mineral water-fed pools are beautiful too.

6. Right in the heart of the capital city lies this Georgian-style mansion, Devon House. Devon House was the home of Jamaica’s first coloured millionaire and today it is a well-preserved national heritage site open to tours. Its former stables, kitchen and other buildings now host some of Jamaica’s finest restaurants, confectionaries and souvenir shops. The icecream from the I-Scream Shoppe ranked as National Geographic’s fourth best place in the world to eat ice cream in 2011, and its bakery serves up Jamaica’s most elegant patties. Everything at this place is IG-worthy from the black checkered tiles in its stores, the beautiful flowers, the lush lawns and trees, the greathouse, the fountain and even the food. 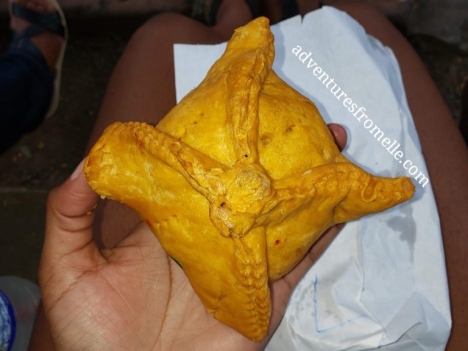 A lobster patty from Devon House

7. Frenchman’s Cove in Port Antonio is a sheltered beach and estuary which gives one the opportunity of swimming in fresh and salt water at the same beach. The soft powder-white sand, crystal clear water and IG-worthy swings earn this beach a spot on the list. The delicate beauty of this river-meet-beach feels almost ethereal.

8. Blue Lagoon is the only place from this list I haven’t visited before and that’s something I plan to fix this year! With glistening, turquoise blue waters surrounded by lush greenery, Blue Lagoon is a sight to behold. The water’s colour changes throughout the day depending the sun’s position, ranging from turquoise to deep sapphire blue. Visiting the lagoon is free but a raft tour really seals the deal. You can also take a boat ride to Monkey Island which is just over 1 mile away.

Enjoy these other photos of Portland and see why it is my favourite parish in Jamaica [HERE].

9. The elysian Reach Falls in Manchioneal is a series of delightful cascades along the Driver’s River. It was first discovered centuries ago by runaway slaves from plantations in the neighbouring parish of St. Thomas who sought refuge in the John Crow Mountains. Everything about Reach Falls is Instagrammable from the main waterfall and conquering the ‘Rabbit Hole’ to the lush tropical rainforest greenery with over 23 species of ferns.

10. Pelican Bar lies one mile off the coast of Parottee in St. Elizabeth and wins the title of the coolest bar in the Caribbean. This unique bar resembles a gigantic bird nest made from driftwood, palm fronds and coconut tree trunks and is perched on a sandbar in the middle of the turquoise Caribbean Sea. It’s quite Instagrammable to dine here and pose with a cold Red Stripe in hand. Even better, carve your name in the driftwood (this is actually encouraged) or leave a keepsake and immortalize it with a picture on the ‘Gram. Stay for the sunset if you can. 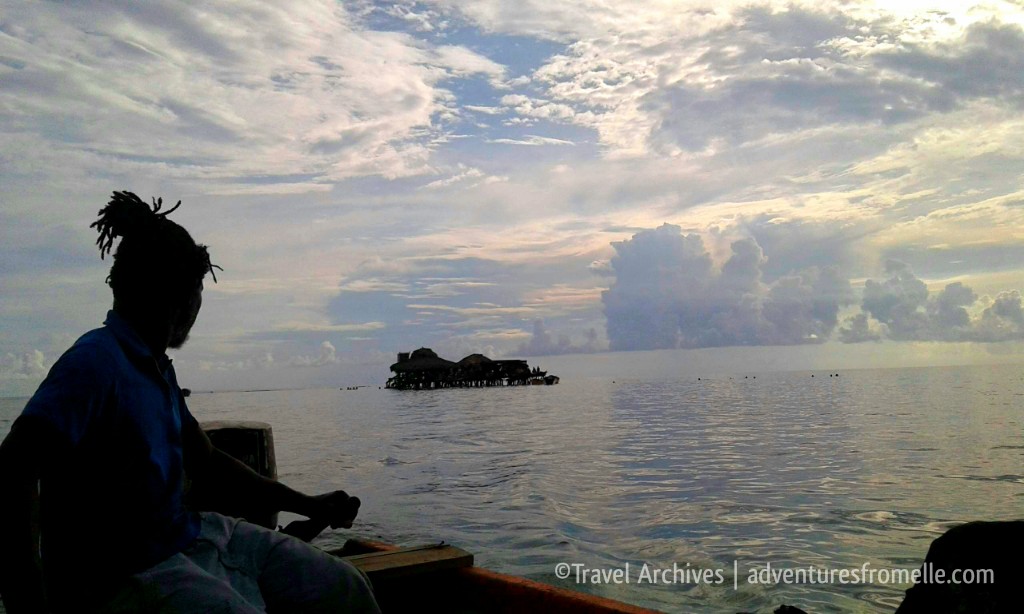 It’s ironic that I posted this article while on an indefinite Instagram break as an attempt to improve time management, focus on more important matters and also, for my mental health. Instagram can be a great space if you follow accounts which inspire you, and many people, especially millenials, enjoy taking and posting pretty pictures for the ‘Gram as a way to update their friends and relatives about the more glamorous side of their lives and travels. If you’re in that group, this post was for you. How many of these beautiful Jamaican places have you visited and which would you like to visit? Which other beautiful places should have made the list? It’s no surprise that Portland took the lead with three out of ten places from this list. It’s my favourite parish in the whole of Jamaica, and dare I say my favourite place in the entire world. 🙂 Also, in case you’re wondering, yes. Instagrammable is now a real word.

Read next: 7 Off the Beaten Track Jamaican Places Which Are Totally Worth the Effort

33 thoughts on “The 10 Most Instagrammable Places in Jamaica”