Ahoy, me hearties! Over a bottle of Jamaican rum, let’s talk about the Wickedest City of the West during her glory days, shall we? It still amazes me that there are tourists who believe Port Royal is a fictional place after watching Pirates of the Caribbean. Thankfully, Port Royal is located fifteen minutes away from the Norman Manley International Airport in Kingston, making it pretty accessible.

If you’re taking the bus, the one to get from North Parade in Downtown is JUTC route 98 and you’re getting off at the final stop. The Fort Charles museum tour is available every day from 9am–5pm at a cost of US$15 and $8 for foreigners and JA$600 and $300 for locals, adult and child prices respectively. Local adults are required to present a valid local ID. Discounts are available for local primary and secondary school children at $250 while teachers and tertiary students with ID pay $500. Guided tours of the town are also available at an additional cost. Pay at a small booth to the left of the entrance then you’ll be gestured to these white buildings pictured below to begin. Walk-ins are welcome and in fact, if you prefer wandering the fort without a guide, that’s allowed too!

Port Royal’s history dates back to the island’s earliest inhabitants, the Tainos, who used this area which they called Caguaya as a fishing port. When the Spanish took ownership of Jamaica, Port Royal was used as a harbour and for repairing sea vessels, but it didn’t come to notoriety until the British captured the island from the Spanish in 1655. The British realized the strategic relevance of Port Royal and quickly went about setting up fortifications to prevent invasion by other European powers. For the rest of the 17th century, Port Royal was Jamaica’s unofficial capital and home to the real pirates of the Caribbean. One in every four buildings was said to be a bar or brothel where the buccaneers would spend their spoils on wine and women. Piracy was a lucrative business, so much so that Port Royal was not only the wickedest city but also the richest city of the western world. Its location along the Kingston Harbour, the world’s seventh deepest natural harbour, made it a good commercial centre as well where merchants traded slaves, sugar and logwood. As it grew richer, Port Royal’s notoriety for excess and debauchery grew, earning it the name ‘Sodom of the New World.’ Thus, when a massive earthquake and tsunami struck on  June 7, 1692 sinking most of the city underwater and killing approximately 2,000 people, the local clergy described the catastrophe as God’s punishment. Subsequent disease outbreaks claimed an estimated 2,000 additional lives in the next several months. Attempts at rebuilding the city was met with fires, hurricanes then another earthquake in 1907 so gradually, Port Royal’s popularity faded.

Much of the city is preserved a few metres under water, along with several hundred sunken ships in the harbour, making it one of the world’s most important underwater sites and having the richest repository  of shipwrecks globally. Thus, Port Royal’s sunken city, along with Seville Heritage Park, is on Jamaica’s UNESCO World Heritage Site’s tentative list for inscription. This would put it right up there alongside the great pyramids of Egypt for significance in human history. Exciting work to make this dream a reality is currently underway through local stakeholders with overseas expert input. On land, Port Royal is a sleepy fishing village today which has maintained much of its beauty, heritage and independence. It is one of the most important historical and archaeological sites in Jamaica because for over 200 years, Port Royal was England’s largest Caribbean naval base, so strong and powerful that no enemy dared attack it. Its residents are proud and very welcoming of the tourists they get daily who come eager to hear the history of Port Royal from a local firsthand. The community is small, laid-back, close-knit and untouched by crime. It’s as if time moves slower here.

The tour starts here. Fort Charles features a small museum with a knowledgeable curator who’ll take you through the history of Port Royal from its Taino past to being the Caribbean’s largest English naval base and how that came crumbling. My informed and jovial guide Jahmawni did a superb job of bringing the tour and colourful past of his community to life. 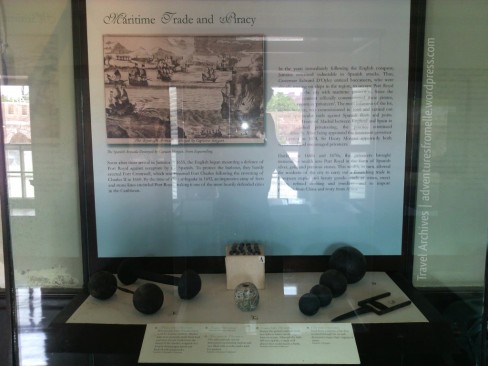 The cannonballs and explosives used at Fort Charles 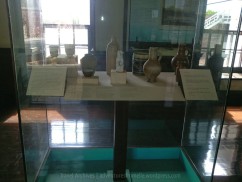 Fort Charles is Jamaica’s oldest fort, constructed in 1656 and was originally named Fort Cromwell  but renamed in 1662 to honour King of England Charles II. When built, the fort was almost completely surrounded by water, but the area around it eventually silted up. This fort was one of six built to guard the Kingston Harbour but was the only one to survive the 1692 earthquake. Damaged, it was reconstructed in 1699 by Colonel Christian Lilly, chief engineer of Jamaica. 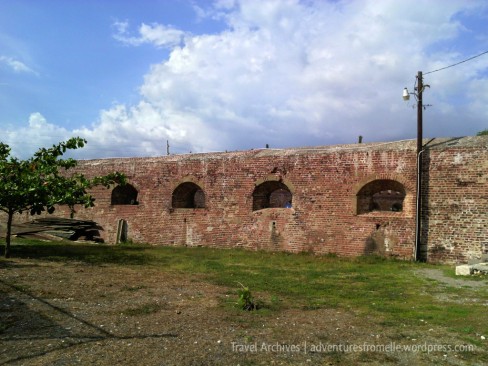 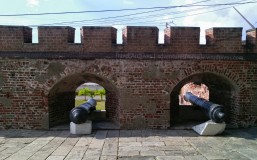 Another look at the cannons 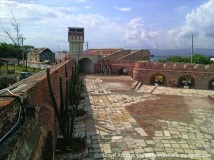 Look at how peaceful Fort Charles is today 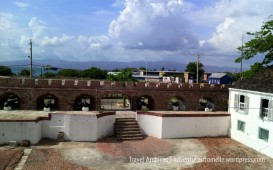 Another look at Fort Charles 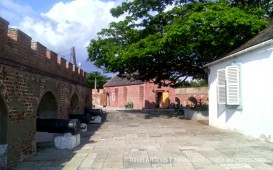 Shady seats under the guango tree

Massive guango tree which has been around for over 200 years 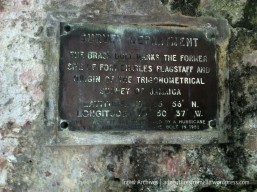 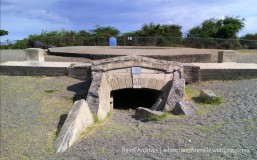 Entrance to Fort Charles’ battery, the storehouse for heavy artillery

Artillery from the battery 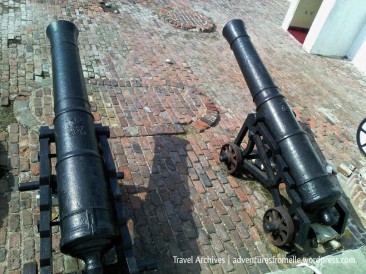 Built in 1888 to store Fort Charles’ artillery, this ordinary building was jolted to its present precarious position during the 1907 earthquake. The limestone incorporated into its structure makes it porous and semi-permeable, letting in and filtering sea water to create a tiny freshwater pool in the corner. The building wreaks havoc on the senses, but is it really a trip to Port Royal without speed-walking through the Giddy House? Ask someone to take a photo of you from the side– I assure you I haven’t edited the photo & was standing perfectly upright, or at least trying to. 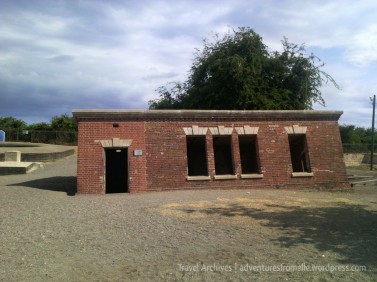 These places weren’t included in my Fort Charles tour but I explored them on my own.

The original church was destroyed by the 1692 earthquake, rebuilt shortly after then destroyed again by fire in 1703. A plaque outside the church records that it was rebuilt between 1725-1726 and since then has undergone much restoration. Its walls are now cement-covered, hiding the original brick wall, but the original black and white tiles can still be seen inside the aisles of the Church.

This cemetery serves as the final resting place for soldiers and sailors who died during the 1800s and prior at Port Royal, many of yellow fever. Some Port Royal residents say it’s haunted but I only saw a peaceful expanse with interesting albeit somber crosses, tombstones and epitaphs.

Entrance to the Old Naval Cemetery

Inside the Old Naval Cemetery

Another view of inside the cemetery

Constructed in 1853, the Plumb Point Lighthouse is still active & stands on the Palisadoes peninsula near the entrance of the Kingston Harbour. The tower stands at 70 feet (21m) tall & is built of stone and cast iron. It flashes a brief white light every 8 seconds and is visible as far as 25 miles away at night.

Present-day Port Royal thankfully bears no similarity to its 17th century reputation, which is all good and well considering it’s a popular field trip spot for school children. Nonetheless, its history is very exciting and what remains of the town today is definitely worth a look. I had wanted to see the national heritage site through adult eyes since my preparatory school memories of Port Royal have largely faded and the experience certainly didn’t disappoint. I rate the Fort Charles tour full stars, ☆☆☆☆☆.

Check out the Jamaican travel blogger who inspired my visit: The Swiss Freis.

Also, get more information on Port Royal from the Jamaica Tourist Board and the Jamaica National Heritage Trust.