Good things in life are discovered by chance, and that’s how I ended up spontaneously visiting the Montego Bay Cultural Centre. On my first ever visit to Jamaica’s second city, my morning commute to school led through the Sam Sharpe Square and I happened to look out the window just as we were passing the cultural centre the first morning. I finished school early that same day and after alighting from a taxi in Downtown, I realized I was on what appeared to be the other side of the building.

Being the person I am, I decided to walk around, go inside and ask the price to enter which turned out to be an affordable $200JMD with my school ID. The admission fee gives one access to the National Gallery West, National Museum West and a permanent Rastafari exhibit, all three of which are housed beneath the same roof.  Here’s how that hour went:

Before we get into the article, please subscribe for new articles & adventures.

Check out Elle’s books on Amazon and shop Jamaican wall art at sheldonlev.com using my discount code: ELLE10 at checkout.

How to Find the Montego Bay Cultural Centre

Located smack in the middle of Sam Sharpe Square, Montego Bay’s town centre, the cultural and civic centre is pretty easy to spot. If you miss it, just ask anyone for directions. They’re open Tuesdays to Saturdays from 9am to 5pm, Sundays from midday to 5pm and closed on Mondays. Admission is JM$500 for adults, $250 for senior citizens and children, and $100, $150 and $200 for primary, secondary and tertiary students respectively. It seems this may be the last place I get to use that student ID perk! Anyway, the centre has a bistro, decent restrooms and the lobby doubles as a reasonably priced gift shop for books, jewelry and the usual souvenir stuff.

Rastafari is an Abrahamic religion and social movement which originated amongst the impoverished and socially disenfranchised Jamaicans of African descent in the 1930s. Sporting dreadlocks, smoking marijuana and holding strongly Afrocentric and sometimes even radical values all challenged the status quo at the time which led to a lot of unwarranted discrimination and even persecution during the barbaric Coral Gardens incident of 1963, which happened in this very parish. Thus, where better to have a tribute to Rastafari’s early beginnings, founding fathers, customs, trials, triumphs and global impact than the parish of St. James. The content was delivered via colourful graphics, artifacts and a brief black-and-white documentary with Rastas telling the story of their struggle to acceptance by Jamaican mainstream culture.

The National Museum West gives a brief chronological tour of Jamaica’s history from its pre-Colombian Taino ancestors, to the coming of the Spanish in 1494, the subsequent importation of African slave labour in the 1500s, the capture of Jamaica by the British in 1655 and their continuation of the slave trade. It also tells of the enslaved people’s fight for freedom and then emancipation and subsequent independence of my people. Our rich history and its heinous hues are told in various museums and historical landmarks across the island, but what was striking to me about this trip down memory lane is its emphasis on the sugar plantations and the fight for emancipation, since western Jamaica was home to the greatest concentration of plantations and the largest most successful slave rebellion in 1831. Sam Sharpe, one of Jamaica’s seven National Heroes, led this fight so it was heartwarming to see him featured a lot in the displays, including a bust in his image. Quite sobering, however, were the torture means on display from our colonial past including a solid cast iron human metal cage in which one would be left to die, along with leg shackles, wrist shackles and a tongue restraint which would cause its victim to starve to death. I’d never seen a lot of these torture means before in other museums across the island. (Click to enlarge & read captions).

A brief look at the Tainos

The coming of Colombus & the Spanish with their 3 ships, Santa Maria, Pinta & Niña 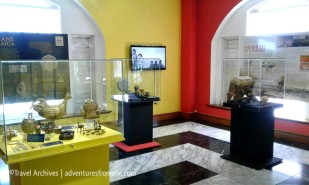 A replica of the cast iron sugar boilers and a ladle used to stir & check the sugar in the factories. Yes, the handle is very long because the steam was great.

An assortment of itens used in eras gone by

Shackles and tongue restraint (sorry about the bad glare)

A cast iron human cage used for punishment of slaves 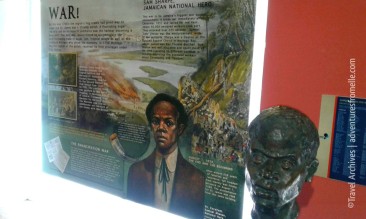 A poster about Sam Sharpe next to his bust

The museum wasn’t all sombre, however. The 1900s were more cheerful.

Last but not least is the National Gallery West on the second floor, with its current exhibit of Due West. Due West began on January 20 and runs until April 14th, and showcases both amateur and established artists from Western Jamaica. Last August I visited and wrote about the National Gallery of Jamaica in Kingston, so it was interesting to finally visit the branch out West, especially having this comment in the back of my mind from Robyn, a Montegobaygonian (people say that? Like how we say Kingstonian?….Tell me in the comments). You can check out her blog here.

I was really hoping she was wrong, but the National Gallery West was very lacklustre compared to its Kingston counterpart. For starters, the space is considerably smaller– a small room with scant pieces compared to the massive spread and two stories in Kingston. The gallery in Kingston has five large exhibition rooms, four of which are permanent galleries, while the fifth has temporary collections which change often enough to prevent the gallery from feeling static. The curator of National Gallery West explained that they try to do something similar, however there are space and budget constraints, plus they have very few permanent pieces. Thus, most of the work displayed out West are borrowed from collectors, amateur and established artists or from Kingston after their temporary exhibits have ended. There’s no Last Sundays programme here either to encourage support of the Gallery, so as it stands most of their visitors are from the curious tourist or school trips, unlike Kingston where some people visit every single month without fail to see the latest exhibit and enjoy live music. It must have been refreshing for her to see two ordinary twenty-somethings on a Tuesday afternoon.

But hey, comparison is the thief of joy so let me highlight Due West for what it is. An excellent initiative to give recognition to both startup and seasoned artists out West, the exhibit has pieces done in paint, pencil, ink and mixed media, along with a few photographs. After viewing all the work, you have a chance to leave your vote on which artist is your favourite. After April 14th, the artist with the highest votes shall receive a cash prize. I guess it’s not prudent to say who I voted for, but below are my favourite pieces from Due West.

The Montego Bay Cultural & Civic Centre is a beautiful staple in the heart of Downtown, Montego Bay, and I think it does what it’s intended to do– instill civic pride in its citizens and educate our visitors about Jamaica’s history. The centre has the dual role of showcasing both our history and art, but unfortunately the former significantly overshadows the latter. I hope the National Gallery West gets the funding and space it needs someday soon– no need to have it looking like the ugly stepsister to the resplendent National Gallery of Jamaica in Kingston. Overall, I rate the Centre four stars ☆☆☆☆, and I think it’s a must-see for anyone visiting Montego Bay for the first time, albeit under-promoted. Leave the beaches sometimes! This coastal city is bursting at the seams with history and charm.

Also, if this is the first you’re visiting my blog since March 10, you’ll notice it looks entirely different. Feel free to look around, see what’s changed and follow me on Facebook, Pinterest and Instagram if you aren’t already doing so. Take care! Remember to subscribe.

Adventures from Elle is a leading travel & lifestyle blog curated by Rochelle Knight. Her adventures are mostly in Jamaica, occasionally abroad.