With 2017’s bucket list being my third most viewed post this year, I thought it fitting to conclude the 2017 roundup series with a similar list. Last year, I bit off more than I could chew with a 17 in ’17 so certainly there’ll be no 18 in ’18 for 2018. This is the year I become a final year medical student too so 2018 I need to resume putting out my A-game. It’s a good thing all my adventures were already day-trips because I’m gonna be worse pressed for time this year. I will be M.I.A. a lot and it hurts me as much as it’ll hurt you (lol will it?) to neglect Adventures from Elle again. Rest assured I will post every chance I get to experience something blog-worthy because the travel bug has become an omnipresent feature in my life and I LOVE IT.

In regards to 2017’s list, clearly I didn’t do adequate research before posting it since I would’ve realized that:

Thus, my list should really be judged out of 14 huh? In that case, I accomplished 8 of 14 items, a success rate of 57%. It sounds better when I put it that way. 😅 Despite failing miserably on 2017’s list, I still choose to write these lists to show how fluid travel should be. Plus, they’re loads of fun (at least for me) and I have some sort of motivation for when I feel I’ve run out of cheap things to do. My proudest accomplishment this year was making it to Blue Mountain Peak, Jamaica’s highest & the Caribbean’s 6th highest mountain peak. I froze my butt off but next time, I’ll come better equipped and savour the experience more. The air was Alps-quality fresh with a Milky Way, view of Kingston and sunrise so surreal my cheap camera-phone really couldn’t capture their splendour. 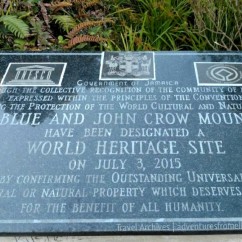 I’m also proud of truly leaving my shell and travelling solo twice this year. Travelling with a group is great, travelling with a partner is even better but travelling alone is pure bliss. You don’t have to find out anyone’s schedule nor compromise with anyone else’s preferences. You get to experience more thoroughly and I’m learning to realize that alone doesn’t mean lonely– a vital life lesson. Being a solo female traveller and still on a budget presents a unique challenge though. While it’s not necessarily going to be my main means of travel for 2018, I chose more places which are safe for a single female wanting to explore Jamaica since I’m cognizant of that challenge. I marked the ones which seem safe enough to do as a solo female with this icon (♀️) but of course, use your own judgement. Hopefully more of my true love (the mountains) get visited for 2018 even if I had a blast with 9 rivers, 8 waterfalls, 7 beaches and 6 heritage sites in 2017. Anyway, here’s what you’ve been waiting for:

1. ♀️ A Blue Mountain Coffee Plantation Tour— Blue Mountain Coffee is only grown in the Blue Mountain range of eastern Jamaica ranging from 3,000 to 5,500 ft. above sea level, giving our coffee its signature mild flavour, sweetness and lack of bitterness. Dating from the 1800s, many coffee estates tucked away on these cool wet green hillsides still plant, harvest, roast and prepare coffee using time-honoured methods with minimal modern input. There are quite a few tours to choose from such as those offered by the Craighton, Clifton Mount, Old Tavern, James Dennis, Mavis Bank Coffee Estates and Lime Tree Farm. For 2018, I’ll stop by at least one.

2. ♀️ Holywell, St. Andrew/Portland— I put off this national park last year but it’s still high on my list of places to visit. Holywell (pronounced holly-well) is located 900m above sea level and offers breathtaking views, hiking along canopied trails, overnight camping in tents & cabins and admiring Jamaica’s lesser-seen bird species. Hopefully I’ll get around to it this year. It’d be awesome if my first visit coincides with February 25 celebrations of the Blue & John Crow Mountains National Park (BJCMNP)’s 25th anniversary.

3. Bull Head Mountain Peak (3,600ft.), Clarendon— Known as the geographical centre of Jamaica with a marker on-site to prove it, I’m looking forward to getting this one under my belt. After accomplishing the highest point last year, it’s only natural to go after the centre of the island now, right?

4. Bath Mineral Spring & Botanical Gardens, St. Thomas— Continuing along the ecotourism vein I felt it fit to visit Jamaica’s first ever established botanical garden for 2018. This will be my 3rd botanical garden feature on Adventures from Elle if I make it there this year and of course, I’ll indulge in getting a therapeutic mineral dip afterwards.

5. Rocky Point Beach, St. Thomas— A few km east of Lyssons Beach is an off-the-beaten-path white sand beach called Rocky Point. I wrote about it in a guest article earlier this year for Live Love Local, an e-magazine by Jhunelle Jureidini’s Simplylocal.life, so 2018 is the opportune time to cross this one off the list.

6. Kwame Falls, St. Mary— It’s funny how I made it to Tacky Falls first considering Kwame is so much more accessible. Ever since reading this blog post, Kwame Falls went high on my list of places to visit yet still no materialization of that plan. 2018 is the year I’ll make it happen. I’m already looking forward to the hike and cool refreshing reward of another off-the-beaten-path waterfall.

7. ♀️ ️Hope Zoo, St. Andrew— When they made the transition from government-run to private in 2013, prices skyrocketed in one go from JM$300 to $1,000 and JM$500 to $1500, children and adults respectively. I was annoyed then like most Jamaicans but in retrospect, the price increase is justified if the business is to run at even meagre profit. Look at what it costs to feed us humans, not to mention a creature the size of an adult male lion! I haven’t been to the zoo since my childhood and with all the renovations, I doubt I’ll recognize it. While I oppose the entrapment of animals since their cages are often too small and don’t reflect their natural habitat, I still have a hankering to relive my childhood this year through the Hope Zoo.

8. ♀ Rose Hall ️Greathouse Haunted Night Tour, St. James— After two greathouses in 2017, both of which are also national heritage sites, I’m really looking forward to exploring a few more for 2018. Every greathouse tour has its own appeal; Seville was its artifacts and history of the Jamaican people while Devon House was its architectural brilliance and the authenticity of its 19th century furnishings. Since Rose Hall’s claim for fame is its alleged haunting, what better time to explore it than at night when duppies (ghosts) come out? With a mixture of clever acting and *maybe* a few authentic creaks and groans, I’m sure this tour will live up to its name.

Honorary mention to Frenchman’s Cove and Lime Cay, two beaches ranked among Jamaica’s finest. These were both on my list for last year but as they say, life happens when you’re busy making plans. We’ll see what happens this year.

Like last year, this post will be updated after each new adventure so feel free to bookmark and revisit it throughout the year to see how I’m getting on. I couldn’t be more blessed to experience Jamaica in ways the average Jamaican doesn’t last year. Let’s see where 2018 takes me.

Happy New Year when it comes.