I can’t help but ruin the surprise at the start. I’ve finally found a free Jamaican beach which I rate full stars! I had the opportunity of spending time in Saint Ann as part of my medical training and with what free time I had, my colleagues & I went beach-hopping on a budget like true A.f.E. style. What better place to go beach hopping than on the north coast! I couldn’t let my time in St. Ann pass without doing so even if I prefer rivers to beaches. On one overcast afternoon we sought out Cardiff Hall Public Beach in Runaway Bay, also called Flavour’s Beach because of a restaurant on the property by the same name. Here’s how that went:

There’s no sign on the main road telling you where to turn off but once you keep looking out for signs that say you’ve entered Runaway Bay, the turnoff to the beach is found on the right side of the road across from a RUBiS gas station. Ample parking spaces are available. Public transport is quite feasible too from surrounding communities such as Saint Ann’s Bay. Once you find a route taxi driver calling out Runaway Bay as his destination, you can hop on board and use the gas station as landmark for where to request a stop. Cautiously cross the often busy road then voila! I’m not sure of the fare but I know it wouldn’t exceed JM$200 per person.

The first thing which stood out was the massive stretch of clean unbroken white shoreline. No stones, no garbage, nothing compared to Fantasy Beach which was the first Saint Ann beach I’d visited. The captivating views of the turquoise Caribbean Sea are probably the same from most other points along the coast but the sand? I’ve never seen sand before like that at Cardiff. Initially I questioned the nature of that black substance in the sand only to eventually confirm that it was black sand interspersed with white in parts. Look at the pretty patterns the receding waves left on this black-white sand!

I visited on a weekday which perhaps explained why we almost had the beach to ourselves. I’m sure the beach is very populated on weekends with a mixture of local and foreign crowds alike who either live or are staying in neighbouring towns and resorts. Nonetheless, you’ll have ample ocean to yourself with the size of this beach, sort of like Negril minus the seven miles and occasional harassment. The sand is extensive enough for playing beach volleyball, building sand castles and the like so bring all you need for entertainment whenever watching the ocean becomes monotonous. Although really, who would find this beach monotonous in under an hour?

In terms of amenities, there are modest seating facilities available and the moderately expensive Flavour’s Restaurant which offers seafood of course, fried chicken, burgers and sides. Since a restaurant is on-site I’m sure bathroom facilities are available but I didn’t actually check for changing rooms nor showers on the premise that it’s a public beach. However, who knows? They possibly could have such facilities since this public beach seems more developed than usual. It still doesn’t hurt to come prepared by wearing your swimsuits though. 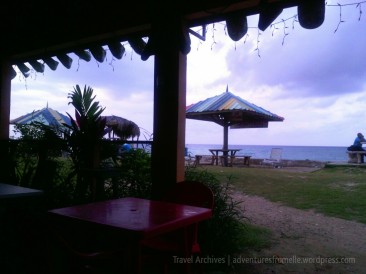 Lastly, I think I’ve figured out the correct way to enjoy the beach. Visit in the evening between 3-6pm when the sun’s inferno begins to dip to warm soothing temps, the water has heated up some and sufficient clouds have formed or drifted over to keep you cool. Now if only one could reduce the saltiness or prevent ubiquitous sand from lodging in odd places. I’m only kidding except for the latter which I perhaps inflict upon myself by choosing to sit on the ocean floor. Also, while I didn’t get the typical “sun swallowed up by sea” sunset at Cardiff, I certainly got a view equally as striking:

I hope the photographs have explained my elation about finding a free beach so spectacular that I gave away its rating from the start, ☆☆☆☆☆. I think the bar has now been set rather high for subsequent public beaches I’ll visit because if Cardiff can do it, so perhaps can more of the free beaches around Jamaica.  Not even a crucial swimsuit strap which chose to fail me in the water dampened the experience an ounce. Will I return to this beach soon? Once someone sponsors me the current JM$1,250 highway toll, a happy resounding yes!

You've gotta dance like there's nobody watching,
T.G.I.F. That's it. That's the caption. (Post coming soon)
POV: Tubing down the White River 💦 in Jamaica 🇯🇲 . [SAVE] this post for summer!
Sky above, sand below, peace within. 📷: @au_naturalle
Advertisements