I first heard about this beauty in an article I read last year on little-known Jamaican waterfalls. I never thought it would be so easy to find until travel blogger Zoe featured it on her website, which I found by chance. The way she outlined her journey made it pretty easy to replicate. Thus, I inveigled my boyfriend and travel buddy to accompany me on Friday December 16th to find it.

My journey began in Half-Way-Tree, travel hub and capital of the Saint Andrew parish, where we met up about 8:45AM. We caught a JUTC (government-owned public transport) bus route 32 to DownTown, Kingston and came off at its final stop (South Parade). We walked around the perimetre of the Sir William Grant Park to reach where the route 97 buses load in North Parade, which would take us to Bull Bay. Luckily, he had an idea where to press the buzzer (which was immediately after passing the Bull Bay Police Station to your right) and where the blue Cane River sign was found on the left of the main road. 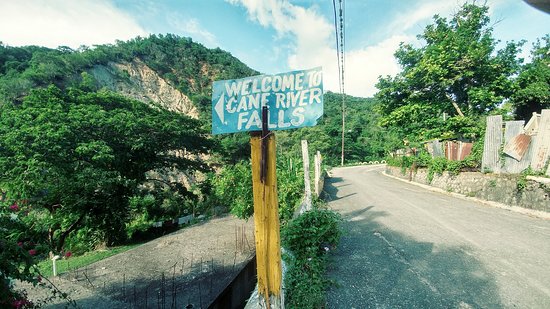 We got off at the bus stop near the sign, and were greeted with several taxi men eager to collect a ‘bills’ ($100 JM) fare to take us up to the ‘scheme’ (smaller districts off the main road). I told the most polite & decent-looking driver that we were going up to the river (& falls). He offered to carry us instantly if we made up the fare to $500 to account for empty passenger seats. We agreed and after a 15 minute or so drive, there we were at the entrance! Thus, the total commute time from start to destination was about 90 minutes.

The thing about nature, it reminds you how small you and your problems are in the grand scheme of things. #tb

This friendly enough Rasta caretaker greeted us at the entrance, requested and collected the admission fee of $200JM per person. He then waved us to the changing rooms and told us where we could leave our things (which was really just a rock in the middle of the water).

Upstream at the Cane River Falls

The path to the falls is left of the property. We began a brief 5minute hike through a cave, down some concrete steps hewn into rocks, and voila! Before then, we could catch (and hear!) glimpses of it upstream. It certainly is not as sheer a drop nor as thunderous as other falls, but it is a beauty in its own right.

Roaring white water cascaded from two points over rock into an azure lagoon, which spilt over a manmade barrier of rocks and sandbags to continue downstream as the Cane River. The little blue lagoon/pool was deep enough to swim in, but shallow enough for me to comfortably stand in [and I’m 5’5″ (1.66m) tall]. The river itself never got to any deeper than mid-thigh depth. We swam, paddled, got pounded by the falls (or a massage, as we put it 😎), picnicked on stones, took selfies and basically just had an awesome day. We even dived into the lagoon twice from the largest rock next to it (. . . Or jumped, but “dive” sounds more adventurous, haha).

A few people came and left at different points throughout the day, but we practically had the place to ourselves.

I could’ve spent another hour or two playing in the pool, beneath the falls, or following the river’s course downstream, but we decided it was wisest to make it home in daylight plus with the irregularities of Jamaican public transport? . . . So we spent a total of about 4 hours there.

P.S. ✔Take the name and number of your taximan if you go public like we did, so you have no hassle leaving afterwards. He came about 10 minutes after calling. ✔Oh and bring food! If I go again, I’d bring more drinking water. Sort of painful to be surrounded by water but thirsty!

Good memories get you through bad weeks.

Adventures from Elle is a blog about experiencing the best life has to offer on a budget, curated by Rochelle Knight. Mostly in Jamaica, occasionally elsewhere.

Your Guide to the Jamaican Blue Mountains